“It is a great honour for us to be named the austria’s best ski resort and certainly not something that we take for granted. It shows that we have been able to maintain our high standard and that we are improving year-on-year. We are clearly on track and for this I would like to thank all the employees and everybody who has contributed to our award,” explained Signe Reisch, President of Kitzbühel Tourismus with delight.

The Kitzbühel | Kirchberg ski area – the world’s best ski resort – lies between the Kitzbüheler Horn and the famous Hahnenkamm. But what makes our ski region such a mecca for skiers and snowboarders? Perhaps it’s the 234 kilometres of perfectly groomed slopes for everyone from expert skiers to novices, the 57 modern chairlifts and cable cars, the guaranteed snow from October until May and the unspoiled natural surroundings. And of course there’s also the very special “Kitz flair” that enchants all of our visitors... and of course we can’t forget the world-famous “Streif”.

Come and visit and find out for yourself! We look forward to seeing you! 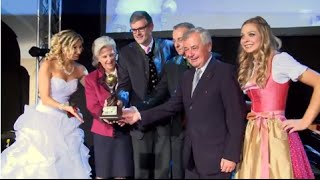